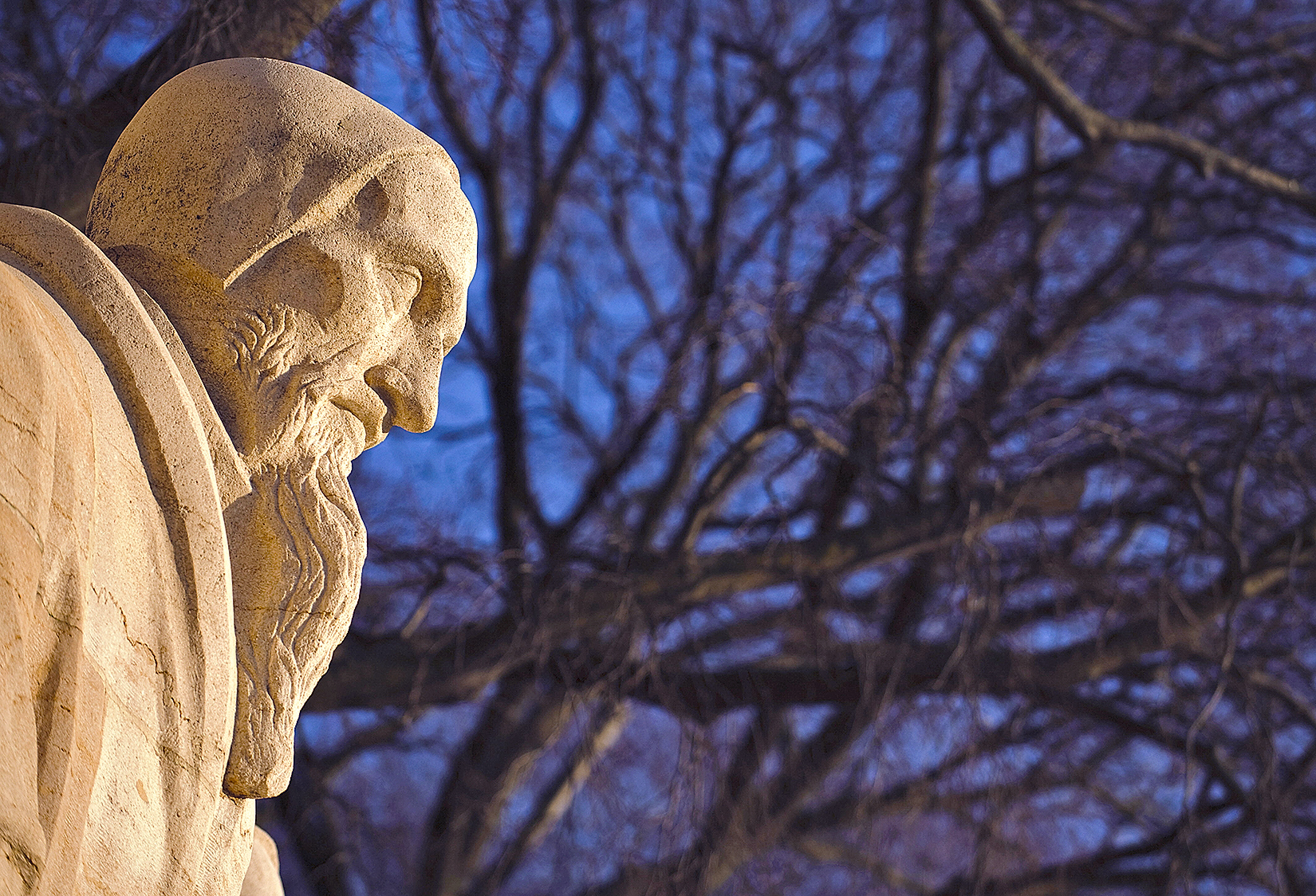 Some in the hyper-literalist camp may not care what Luther says about the bible; they’re more interested in having John Calvin on their side. But Calvin’s view of scripture is fascinating, in part because he follows Luther rather closely. Like Luther, Calvin’s approach to scripture is one of accommodation in which God speaks to our human capacity in language we can understand. He writes:

“Because our weakness cannot reach his height, any description which we receive of him must be lowered to our capacity in order to be intelligible. And the mode of lowering is to represent him not as he really is, but as we conceive of him.”

Along with accommodation, Calvin also viewed God’s revelation as a form of rhetoric. He appreciated Seneca, having written a commentary on his work De Clementia. He viewed God’s Word as a form of rhetoric for the soul, and the practices of Christianity were a school of faith. This emphasis on divine rhetoric fits well with Calvin’s covenantal theology, and the dialogical nature of worship. It also helps us understand his view of scripture as the Word of God calling us to faith. Thus, like Luther, Calvin sees the message of the bible as the revelation of God’s saving grace. Like Luther, Calvin believed in the authority of scripture over the church, rejecting the Medieval emphasis on Tradition and ecclesiastical authority. He also emphasized the literal historical interpretation of scripture instead of the four fold method that privileged allegory. The spiritual message of God’s glory and grace is revealed in the meaning of the text. Similar to Luther, this meant paying attention to language, context, and history in order to determine how God speaks through the words of the author.

Turning to his commentary on Genesis, we clearly see the influence of Luther on his thought. In commenting on the word “day”, Calvin writes this:

“The first day. Here the error of those is manifestly refuted, who maintain that the world was made in a moment. For it is too violent a cavil to contend that Moses distributes the work which God perfected at once into six days, for the mere purpose of conveying instruction. Let us rather conclude that God himself took the space of six days, for the purpose of accommodating his works to the capacity of men. We slightingly pass over the infinite glory of God, which here shines forth; whence arises this but from our excessive dullness in considering his greatness? In the meantime, the vanity of our minds carries us away elsewhere. For the correction of this fault, God applied the most suitable remedy when he distributed the creation of the world into successive portions, that he might fix our attention, and compel us, as if he had laid his hand upon us, to pause and to reflect. For the confirmation of the gloss above alluded to, a passage from Ecclesiasticus is unskillfully cited. He who liveth for ever created all things at once,’ (Ecclesiasticus 18:1.) For the Greek adverb…which the writer uses, means no such thing, nor does it refer to time, but to all things universally. “

Notice how Calvin, like Luther, takes on Augustine’s belief that the cosmos was created in a moment. Notice, also, that Calvin’s reference to God creating in six days was for the purpose of accommodating revelation to the capacity of humans. Did Calvin believe that God created in six 24 hour days? Probably. But the purpose of the text isn’t scientific. In fact, Calvin shows himself open to the views of science later in his discussion of the greater and lesser lights. Here’s a large section from his commentary:

The greater light. I have said, that Moses does not here subtilely descant, as a philosopher, on the secrets of nature, as may be seen in these words. First, he assigns a place in the expanse of heaven to the planets and stars; but astronomers make a distinction of spheres, and, at the same time, teach that the fixed stars have their proper place in the firmament. Moses makes two great luminaries; but astronomers prove, by conclusive reasons that the star of Saturn, which on account of its great distance, appears the least of all, is greater than the moon. Here lies the difference; Moses wrote in a popular style things which without instruction, all ordinary persons, endued with common sense, are able to understand; but astronomers investigate with great labor whatever the sagacity of the human mind can comprehend. Nevertheless, this study is not to be reprobated, nor this science to be condemned, because some frantic persons are wont boldly to reject whatever is unknown to them. For astronomy is not only pleasant, but also very useful to be known: it cannot be denied that this art unfolds the admirable wisdom of God. Wherefore, as ingenious men are to be honored who have expended useful labor on this subject, so they who have leisure and capacity ought not to neglect this kind of exercise. Nor did Moses truly wish to withdraw us from this pursuit in omitting such things as are peculiar to the art; but because he was ordained a teacher as well of the unlearned and rude as of the learned, he could not otherwise fulfill his office than by descending to this grosser method of instruction. Had he spoken of things generally unknown, the uneducated might have pleaded in excuse that such subjects were beyond their capacity. Lastly since the Spirit of God here opens a common school for all, it is not surprising that he should chiefly choose those subjects which would be intelligible to all. If the astronomer inquires respecting the actual dimensions of the stars, he will find the moon to be less than Saturn; but this is something abstruse, for to the sight it appears differently. Moses, therefore, rather adapts his discourse to common usage. For since the Lord stretches forth, as it were, his hand to us in causing us to enjoy the brightness of the sun and moon, how great would be our ingratitude were we to close our eyes against our own experience? There is therefore no reason why janglers should deride the unskilfulness of Moses in making the moon the second luminary; for he does not call us up into heaven, he only proposes things which lie open before our eyes. Let the astronomers possess their more exalted knowledge; but, in the meantime, they who perceive by the moon the splendor of night, are convicted by its use of perverse ingratitude unless they acknowledge the beneficence of God.

Again, Calvin explains the difference between the words of the text and astronomy by appealing to accommodation. Of course Saturn is bigger than the moon, but Moses “fulfilled his office” by “descending to this grosser method of instruction”. In other words, he wrote in a way that people would understand. Notice also his reference to philosophy. Like Luther, Calvin believed the place for philosophy was in the exploration of created things. Clearly, he had no problem with scientific inquiry—he says the study of astronomy should not be condemned. For Calvin, however, Genesis 1 is not scientific. The author is not trying to explain the mysteries of the natural world; the author is speaking of the glory of God as creator and redeemer, and the glory of humanity as a part of God’s good creation.

Would Calvin be open to scientific evidence that the cosmos is much older than 6,000 years? I believe so. Does this diminish his understanding of the bible as the infallible word of God? Not at all. The bible is the revelation of the God who is the creator and redeemer of all things—the accommodated divine rhetoric of God’s love and grace calling humanity back into relationship through the saving work of Jesus Christ. If Calvin were around today, I’m confident he would not hold to a hyper literal interpretation of the bible. To be honest, I’m not even sure he’d be a Calvinist.