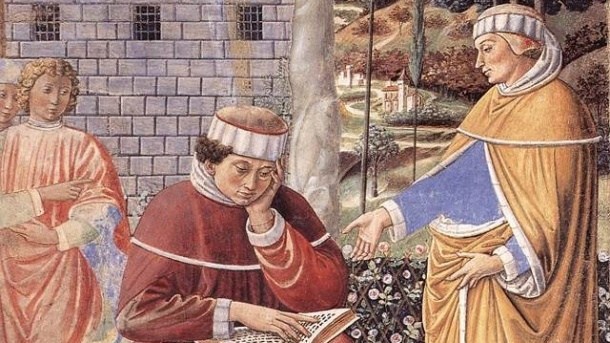 Not many figures in the history of Christianity cast a shadow like Augustine, for good or bad. Some love him for his view of love, desire, and sin, and others dislike him for the same thing. He’s one of the few theologians both Catholics and Protestants claim, even if they disagree on how to say his name.

Why talk about Augustine’s view of the bible when prior posts show that both Luther and Calvin opposed his interpretation of Genesis?—because of his influence on their theological perspectives. While the reformers reject his use of allegory, they build off of his approach to biblical authority. For Augustine, the message of the bible is about salvation and reconciliation with God. Read through the Confessions and there are times when he talks about the bible as a stumbling block to accepting the Christian faith. He writes, “When I studied the bible and compared it with Cicero’s dignified prose, it seemed to me unworthy.” He felt the stories were crude and child like, and it wasn’t until he came to faith that he experienced the rhetorical power of scripture as God’s word. Augustine’s emphasis on the rhetoric of scripture, and his view of accommodation had a profound influence on Calvin. One can hear echoes of Calvin when Augustine writes, “We can safely follow Scripture, which proceeds at the pace of a mother stooping to her child, so to speak, so as not to leave us behind in our weakness.“

Some will object, saying Augustine also goes on record to say the bible is without error. He writes in one of his letters:

For I confess to your Charity that I have learned to yield this respect and honor only to the canonical books of Scripture: of these alone do I most firmly believe that the authors were completely free from error. And if in these writings I am perplexed by anything which appears to me opposed to truth, I do not hesitate to suppose that either the manuscript is faulty, or the translator has not caught the meaning of what was said, or I myself have failed to understand it.

What does Augustine mean by error? Is it the overall message of the bible—the revelation of God and God’s salvation in Jesus Christ? Or is it everything—including science? In The Authority and Interpretation of the Bible: A Historical Approach, authors Rogers and McKim write this:

According to Augustine, the purpose of Scripture was not to bring people information in general, but to bring the Good News of salvation and guidance in the Christian way of life. The Bible was not a textbook of science or an academic tract. It was the Book of Life, written in the language of life. When Felix the Manichaean claimed that the Holy Spirit had revealed to Manichaeus the orbits of the heavenly bodies, Augustine replied that God desired us to become Christians, not astronomers. Such talk, Augustine said, “takes up much of our valuable time and thus distracts our attention from more wholesome matters. Although our authors knew the truth about the shape of the heavens, the Spirit of God who spoke by them did not intend to teach men these things, in now way profitable for salvation.” (26)

We know Augustine didn’t believe in a six 24 hour day creation because he believed creation was instantaneous. Yet, he believed the bible to be inerrant, meaning that it is without error in its message about God and the reconciliation of humanity in Jesus Christ. If that’s what people mean when they say the bible is inerrant, I’m all for it.